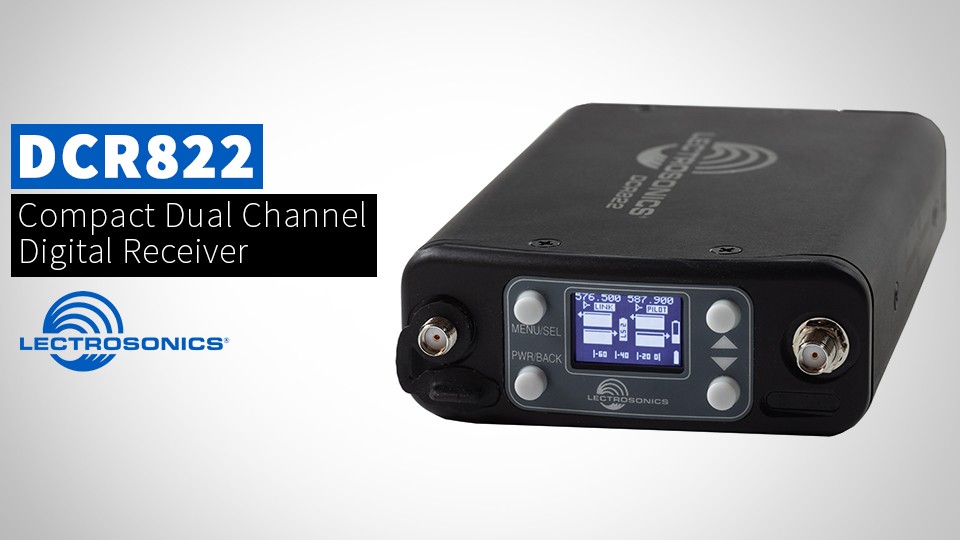 Lectrosonics recently introduced their new dual-channel portable digital wireless receiver – the DCR822. As the successor of the legendary UCR411a hybrid receiver, the DCR822 is getting fully digital and many new features.

The Lectrosonics DCR822 is the successor of the legendary UCR 411a receiver. They share the same size, even the same mount, and the new DCR822 is also compatible with all the D2, DCH, M2 and Digital Hybrid Transmitters.

The Lectrosonics DCR822 is a dual-channel portable digital wireless microphone receiver. It can receive signals from two wireless transmitters, up to 4 channels. The DCR822 has a continuously tunable tracking filter, which covers from 470.100MHz to 614.375MHz.

The DCR822 can be powered by internal AA batteries or external power source. It has a micro SD card slot for both, firmware upgrades and internal audio recording up to 4 tracks. It can output analog or AES-3 audio signal via TA3M connector.

New to the DCR822: it comes with an IR-Port for syncing the transmitters. Plus, the OLED display is much brighter and more comfortable to read than the LCD Display on the UCR411a.

The DCR822 is a true diversity receiver. The Vector Diversity technology from Lectrosonics uses two receiver units per channel. Additionally, the receiver can take two wireless signals damaged by interference and reassemble them to a useable signal. The DCR822 also has a frequency diversity mode, which uses two frequencies simultaneously for one wireless signal, so if one frequency gets interfered, the receiver can jump to the other frequency.

The Lectrosonics DCR822 also has a built-in smart noise reduction. It’s turned off by default but can be switched to normal or full level, depending on different noise reduction requirements.

The DCR822 will be available worldwide from Lectrosonics Authorized UHF dealers, such as B&H and CVP, starting in Q4, 2020. The suggested retail price is $4,740.

What do you think about the Lectrosonics UCR822? If you are using the UCR411a, would you consider upgrading? Let us know in the comments below!